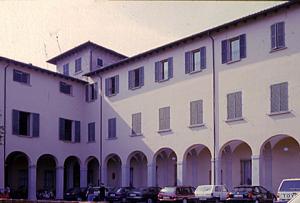 The Imola Section of the State Archives conserves documentary material distinct from that of Bologna, because the historical events of the city have been separate from those of Bologna for a long time.
Between the 14th and 15th centuries, after the tumultuous events of the medieval period and the rapid succession of the rule of the Alidosi, Manfredi, Visconti and Sforza signorie, Imola from the beginning the 16th century until the fall of the ancien Régime belonged to the territory of the Papal Legation, i.e., the papal territorial administrative unit, of Ravenna.
During the period of Napoleonic administration, Imola was included in the Department of the Reno. Subsequently the city was newly included in the Legation of Ravenna by the motu proprio of Pius VI of July 6, 1816. Only after Italian national unification, were the city of Imola and its surroundings placed within Bologna’s provincial territory.
The archival fonds of the Imola section of the State Archives richly document this long tradition of autonomy, which still arouses the interest of scholars and private citizens. For this reason the Imola section of the State Archives, in addition to its consultation service and the laboratory of photo-reproductions for the users of the reading room, offers many other broad activities of popularization and research, aimed both at students of local schools and to the entire citizenry.

The person in charge of the Imola section of the State Archives: Sonia Poli