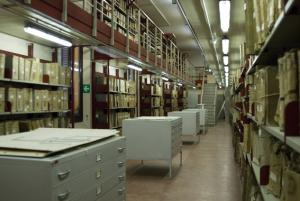 The documentary heritage of the State Archives of Bologna consists of more than 5,000 fonds, for a total of about 250,000 items, testifying to a millennium of the history of Bologna and its region, from the 10th to the 20th centuries. The archival material is available at the reading room of the Bologna State Archives, where users have access to more than 400 inventories and other useful instruments of research (lists, indexes, directories), developed over more than 130 years of the Institute's activities; instruments which describe the various documentary collections and provide  the information necessary for navigating within them, thereby making possible consultation of the fonds.
For some time the instruments of research prepared with traditional methods have been placed next to the database of the documentary patrimony of the Bologna State Archives, representing an authentic on-line guide to the fonds, the result of a multi-year project for the realization of the computerized information system of the Bologna Institute.